This revised scheme for the addition was designed by Larco’s architect Peter Clewes, of architectsAlliance, after consultation with and input from experts in heritage architecture, including representatives from Heritage Ottawa.

Pursuant to the agreement reached with Heritage Ottawa, the parties have agreed to consensually resolve the legal proceedings presently before the Local Planning Appeals Tribunal (LPAT), which are related to the decision of the Committee of Adjustment in 2019, in such a manner so as to permit the revised architectural scheme.

Now that this agreement has been reached with Heritage Ottawa, Larco Investments Ltd will be re-engaging with both the City of Ottawa and the National Capital Commission with respect to the revised design plans.

The agreed upon architectural scheme for the proposed addition is depicted in the two images attached.

A.0.3 Major’s Hill Park view from Colonel By Statue 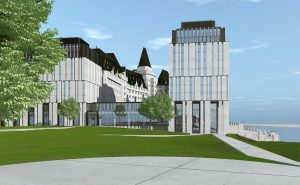 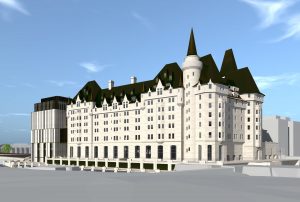 It's important to know the facts and to stay informed. Sign up to receive relevant facts and updates about the addition.